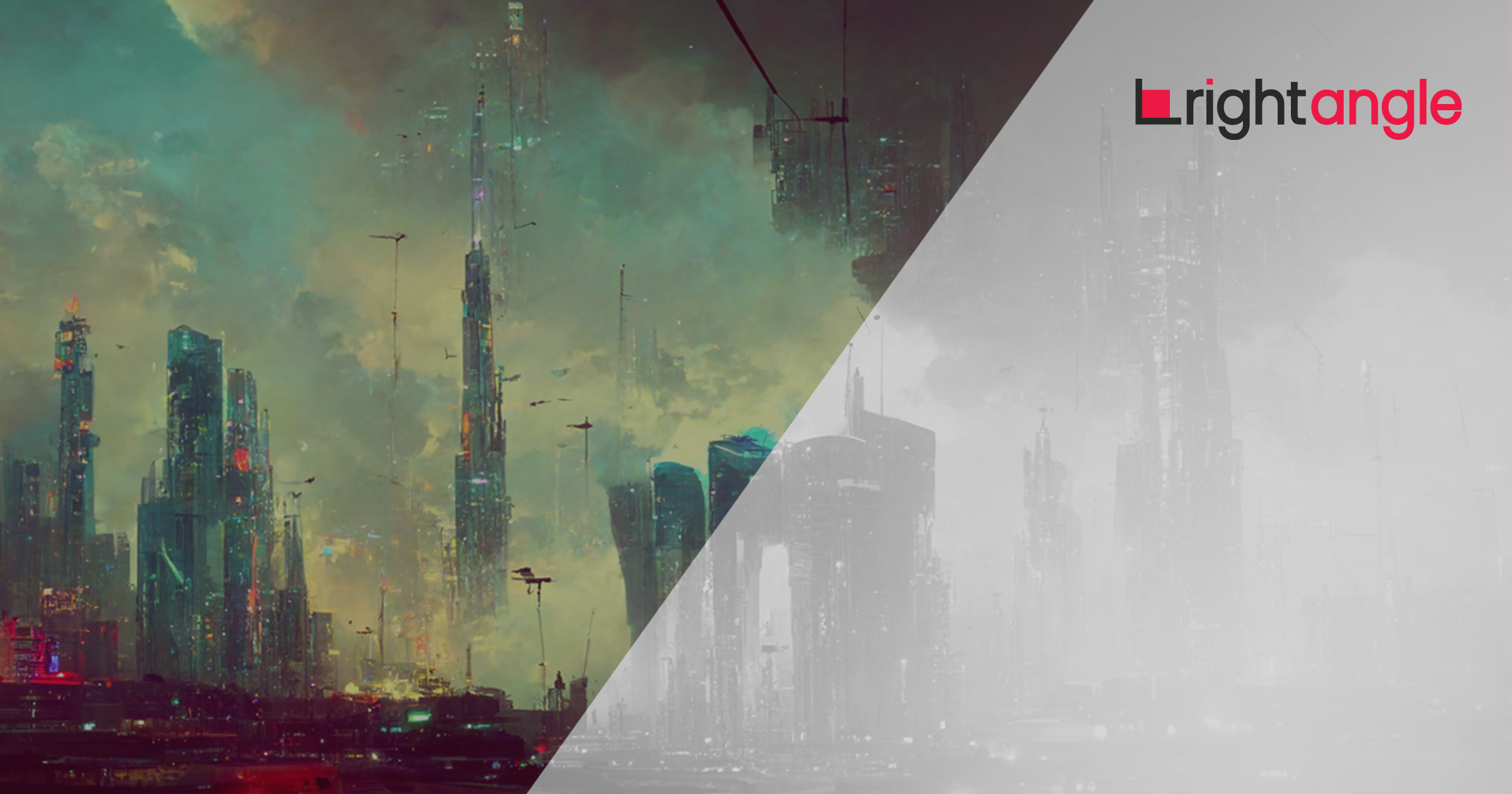 Using Artificial intelligence (AI) to produce artwork is not a new concept, but with the fast technological evolution, AI tools such as Midjourney and Stable Diffusion have made it possible for almost everyone to become an ‘artist’ and create complex compositions by simply typing a few words into a text box.

Such tools cause many human artists to be rightfully concerned about their future. The topic has raised fierce discussions on the ethics and morality of AI-produced art. Moreover, some artists believe that these new tools represent a high-tech form of plagiarism. So far, AI-generated images remain in a legal gray area that no regulatory agency has yet resolved.

In 2022 at the art contest at the Colorado State Fair, 39-year-old Jason M. Allen presented a work he managed to create using an AI tool called Midjourney that can create beautiful images based on the description given by a human. The work is entitled “Théâtre D’opéra Spatial”. 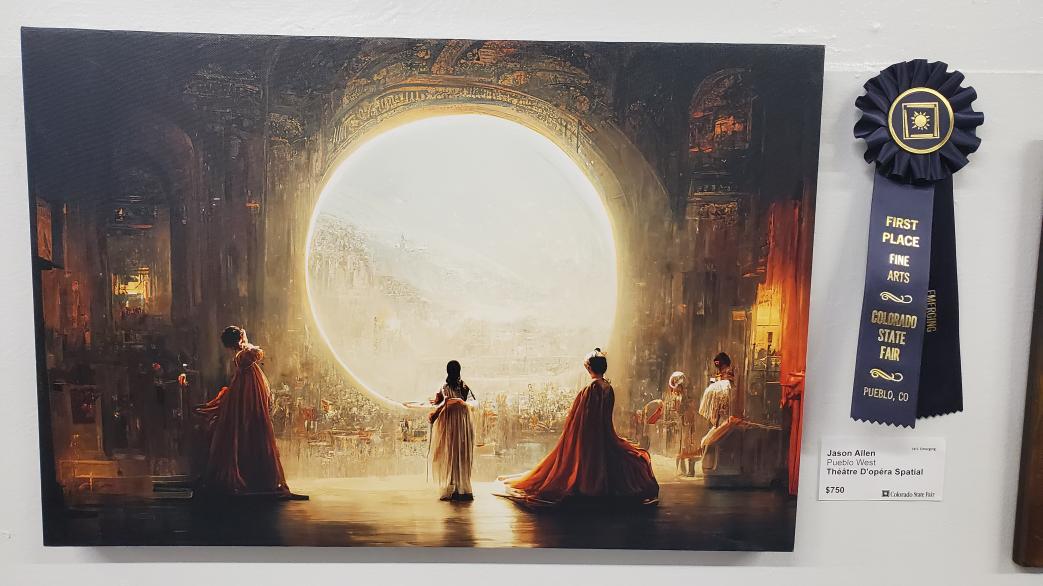 After his work received the blue ribbon, the whole situation sparked a heated reaction from other contestants who stated that it was in fact cheating.

In his defense, Mr. Allen explained that before registration he clearly stated that the visuals were made using AI and his submission was even entitled “Jason M. Allen via Midjourney”. 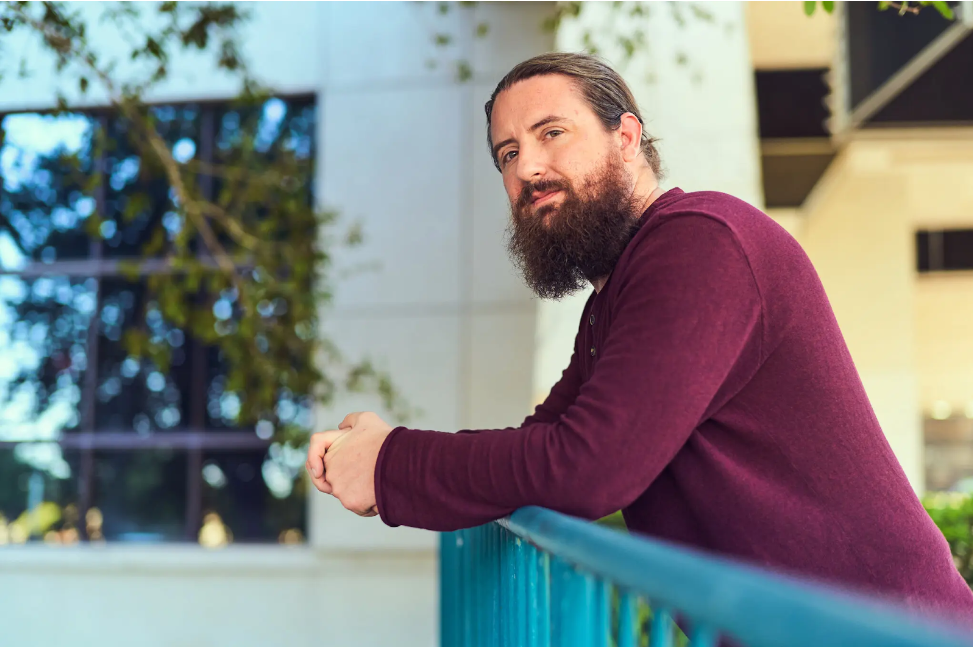 It all began when he started studying AI-produced artwork in 2022 after becoming interested in the way the new AI tools could compete with human artists whose works he had purchased.

After being invited to a chat server where users were carrying out trials of Midjourney, he became obsessed with the tool which led him to the idea of participating in a contest to compete with real artists.

Midjourney is an independent research lab that has developed a proprietary AI application that can generate visuals from textual descriptions close to the open-source Stable Diffusion tool. On July 12, 2022, it entered open beta. 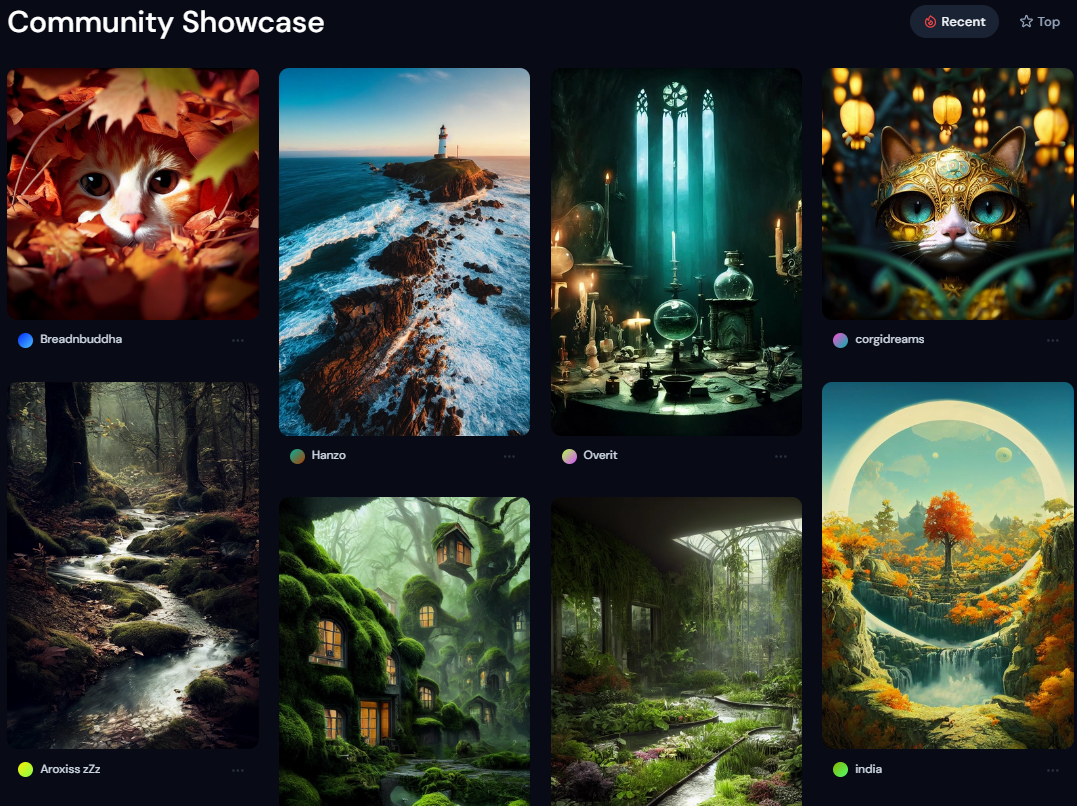 In our increasingly AI-driven society, one artist might be making history but also raising even more legal questions.

An AI-generated graphic novel entitled “Zarya of the Dawn” created by ex-programmer Kris Kashtanova was recently registered for U.S. copyright. According to Kashtanova, the piece was made using Midjourney.

It is likely that Kashtanova was able to register the book by claiming that it was AI-assisted instead of wholly produced by AI. She is the author of the story and designed the layouts. This implies that the work involved a creative process.

Such a combination of human and AI works does at least open up the possibility of further discussion on human + AI collaborative projects rather than anything related to AI-produced art being simply dismissed.

Not everyone was outraged by  Allen’s Théâtre D’opéra Spatial, and their main argument was that AI tools can be compared to digital image-manipulation instruments such as the widely-known Photoshop. Moreover, they believe that human ingenuity is still required to create such works. 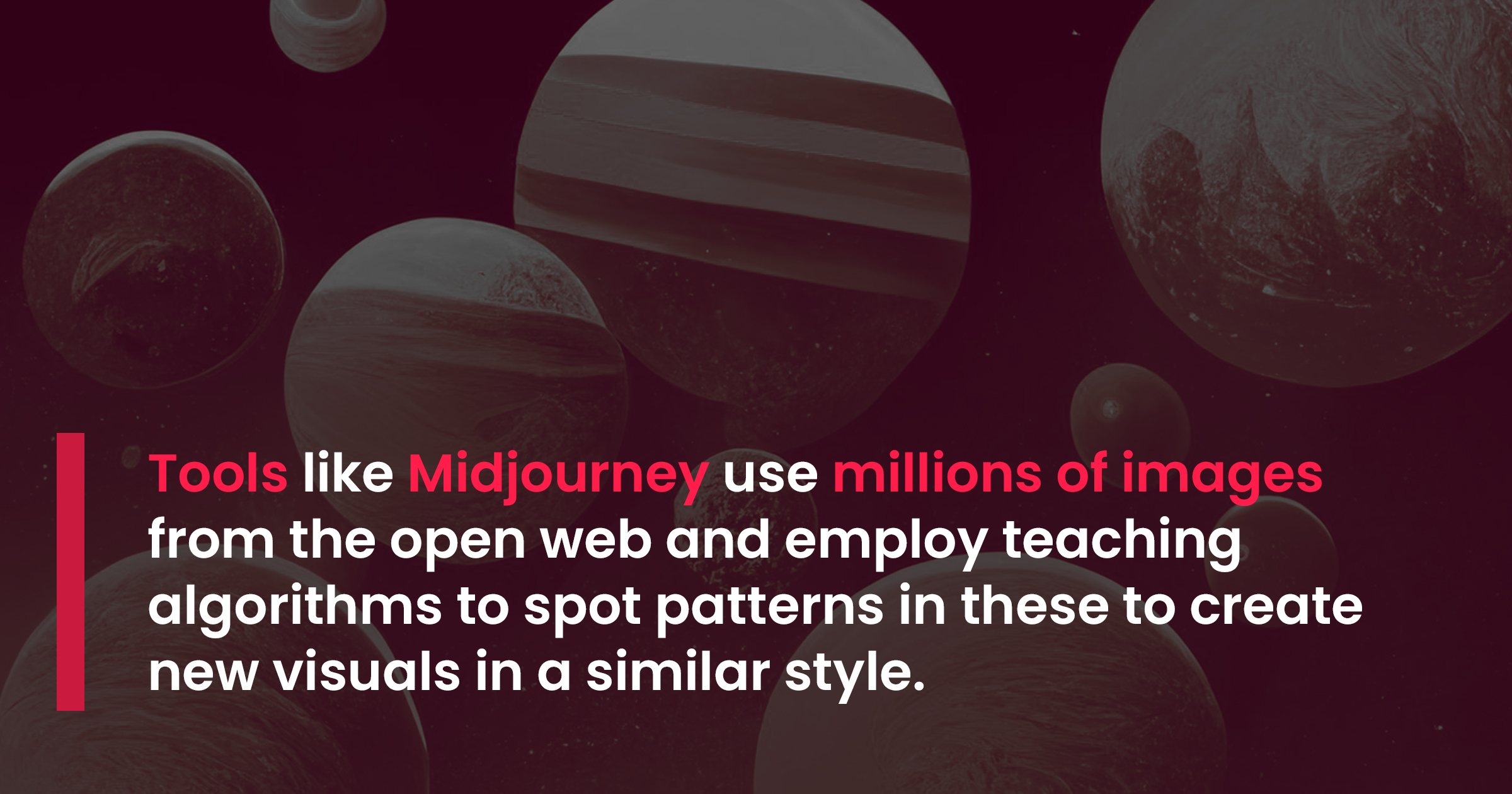 Oddly enough, artists who create original works and then publish them online may serve as AI assisters without even knowing it.

Although the technology is still at an early stage, more and more artists are working out ways to address the issue of their uncertain future when a fully evolved AI threatens to reduce their earnings. The art sector may eventually adopt pay-per-play or subscription models similar to those employed by music and film production companies.

Emad Mostaque, CEO of Stability AI – the company that developed Stable Diffusion – has dismissed concerns that these technologies could replace actual artists, saying:

“To be honest I find most of the AI ethics debate to be justifications of centralized control, paternalistic silliness that doesn’t trust people or society. Stable Diffusion represents the internet as is, but we are going to countries and societies globally to change this”.

He also mentioned that Microsoft’s Excel “didn’t put accountants out of the job.”

An independent investigation examined 12 million images out of 2.3 billion from Stable Diffusion’s dataset and revealed that roughly half of the images were taken from 100 domains, including Pinterest, Flickr, Tumblr, Getty Images, and Shutterstock and all of these sources include copyright information.

According to Mostaque, copying public materials from the Internet is allowed in the US and the UK. However, this does not exclude future legal challenges being made. In addition, he claims that because Stable Diffusion represents an open source, its features are provided freely for anybody to exploit.

The moral issue with images generated by AI

With such innovations becoming an important part of the Internet’s infrastructure, it is not only artists who need to be concerned – everyone should be.

In 2021, AI experts Abeba Birhane, Vinay Uday Prabhu, and Emmanuel Kahembwe examined a smaller dataset similar to that of Stable Diffusion. Their conclusions were upsetting. The dataset contained explicit imagery, racist and ethnic slurs, and much more, all of which were collected from various parts of the open web, and the latter is far from being dubbed a perfect place. 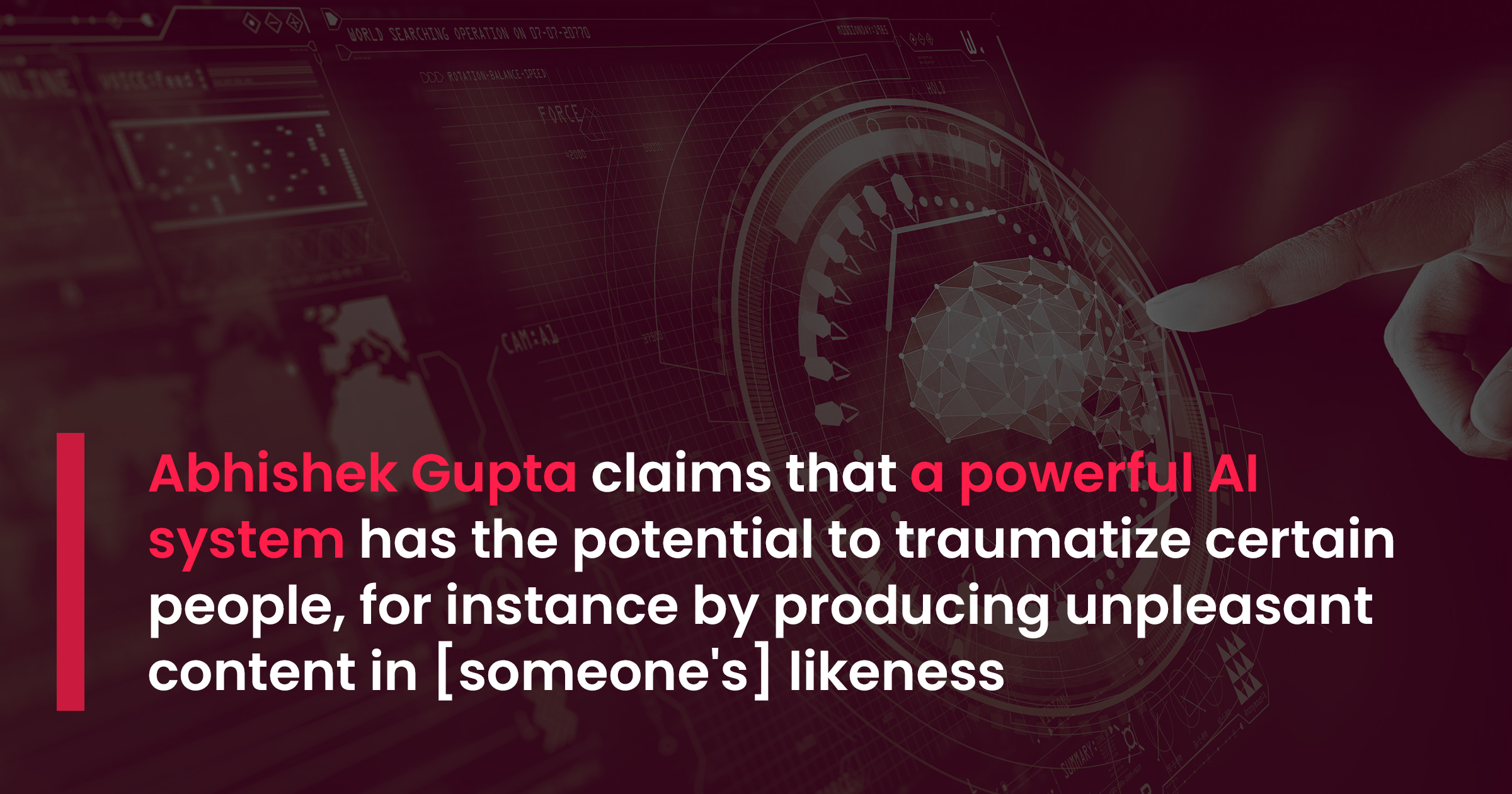 Online art communities are being confronted with a real challenge. Regardless of what you think about the moral aspect of AI art, it can produce images hundreds of times quicker than humans, with a strong graphics processing unit (GPU) able to come up with thousands of photos non-stop.

If this trend continues and remains uncontrolled, it is not difficult to imagine AI art moving human artists to the passenger seat since they need days, weeks or even longer to create their images.

Community administrators and moderators will need to decide whether to accept, segregate, or outright prohibit AI art in order to maintain the vibrancy of their communities.

6 uses of artificial intelligence (AI) in the healthcare industry

Does AI have the potential to revolutionize the Expert network industry?

adminArt by Artificial Intelligence sparks debates. Is there a future for it?10.07.2022
Register as an Expert
🍪 We use cookies to improve your experience on our website.     Find out more.